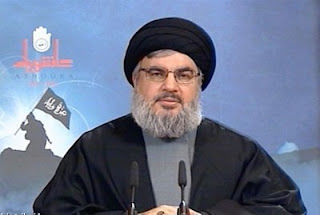 BEIRUT, (SANA) – Hizbullah Secretary-General Seyyed Hassan Nasrallah said that the Israeli occupation entity is benefiting from conflicts in the region and Syria to wage its aggression on Gaza, regretting remarks made by the political leaderships in some Arab countries that the war against Gaza aimed at diverting attention away from Syria.

Nasrallah remarks came during in his speech marking Ashura.

He wondered that "does it make sense that Binyamin Netanyahu and Ehud Barak wage a war against Gaza to divert attention away from Syria since their objectives are clear?"

"Today’s aggression is happening in a different context from 2008. In 2008, the Resistance axis was more capable of extending support to Gaza and the resistance there and this was the case before 2008 and after 2008. One of the supply channels to Gaza has now been suspended and that is Syria. It can no longer provide logistical support, although it can still take a political stance in support of Resistance," he added.

Secretary General of Hizbullah said that "Israel is taking advantage of the events in Syria, the reversal of priorities and the transformation of enemies into friends and friends into enemies. It considers this as a good opportunity to restore its deterrence and to strike at missile capabilities in Gaza, which Israel is aware, will be hard to replace in light of the situation in Syria."

Nasrallah said that the Israeli aggression on Gaza is an episode of the episodes of the bloody, historic and decisive confrontations between the Resistance and the Zionist enemy and those behind it that will decide the destiny of Palestine, the region and the whole nation.

Hizbullah Secretary-General condemned the Israeli aggression, urged the Arab and Muslim governments, countries and people as well as all free people in the world to support Gaza and its people and resistance.

Nasrallah called upon the Arab and Islamic countries to supply Gaza with weapons and use oil to pressure the U.S. and Europe into ending their support for Israel.
Gepost door Joost op 09:09 Geen opmerkingen:

Weapons Smuggler: Turkish Weapons, Funded by Saudi Arabia and Qatar, Are Being Smuggled to Syria 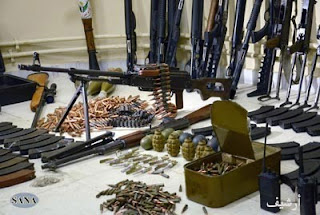 ANKARA, (SANA) – Abu Abdo, weapons smuggler who channels weapons and money from Turkey to Syria, said that the government of Development and Justice Party (AKP) is playing the major role in facilitating weapons smuggling and opening the borders for terrorists to cross to Syria.

AFP quoted Abu Abdo as saying that "If Turkey tightens the security on the Syrian-Turkish borders, then the 'repels' will lose in ten days."

Abu Abdo added that he has information that confirms that Turkish weapons have been purchased by Saudi and Qatari money as to be smuggled to Syria.

Abu Abdo confessed to smuggling communication devices, vests, weapons and munitions to the so-called 'free army', adding that lots of goods, including food, medicine and other basic materials, are being brought to Syria from abroad because of the international sanctions imposed on the county.

Lavrov: The West Is Reconsidering Its Stance towards the Syrian Opposition 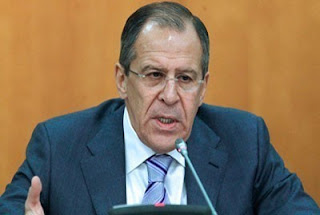 He added in an interview with the Russian RIA Novosti news agency and the newspapers of Moskovskiy, Russia in Global Affairs and Novosti, published on Thursday, that he has an impression that for the past few weeks the West's stance towards the Syrian opposition has started to change remarkably.

Lavrov attributed this change to the frustration over the failure in unifying this opposition on the one hand and the growing fears of the domination of new powers other than those on which the West was betting on the other hand.

The Russian Foreign Minister continued to say that Moscow believes that it is essential and crucial that the opposition gets unified around the Geneva Statement, pointing out that up till now attempts to unify the opposition groups have been done on the ground of working against the Syrian government, which is wrong.

Lavrov stressed that Russia is continuing its efforts in this regard, as it has been meeting representatives of the various opposition groups to enhance the idea of dialogue between them and the Syrian government.

Ryabkov : Moscow Convinced that Geneva Statement Still Vital, Countries of Influence on Syrian opposition Don't Use their Influence to Find Solution to Crisis
Russia's Deputy Foreign Minister Sergei Ryabkov on Thursday said Moscow is convinced that Geneva Statement is still vital. Itar-Tass News Agency quoted Ryabkov as saying that and that countries which have influence on the Syrian opposition don't not use their influence to find solution to the crisis in Syria.

"Western players who have influence on the Syrian opposition don't not do their job well," he said, adding that this thing is likely to be intentional. He made it clear that Russia do everything to stop the violence and begin a comprehensive political process in Syria.

"We are not confident that the Syrian government's unilateral concessions will be the way to settle the situation, it is impossible for the ceasefire to be a unilateral," the Russian official said.

Ryabkov stressed that Moscow's position depends on the correct reading and unquestionable standards of the interpretation law. " However, we do not lose the hope as there are still opportunities to find a solution to the crisis in Syria,"

Lukashevich: Moscow exerts more Efforts to stop violence in Syria
Spokesman of the Russian Foreign Ministry Alexander Lukashevich affirmed that Moscow will exert more efforts on all levels to halt violence in Syria, saying that improving the humanitarian situation in Syria would not be realized except by a political solution to the crisis.

At a press conference, Lukashevich said that the humanitarian situation in Syria is deteriorating due to the unilateral sanctions imposed on Syria by some countries.

"The true criterion to evaluate any meeting for the Syrian opposition lies in the participants' readiness to find a peaceful resolution to the crisis in the country by virtue of the Syrians only, without any foreign intervention and through dialogue." Lukashevich added.
Gepost door Joost op 14:10 Geen opmerkingen: 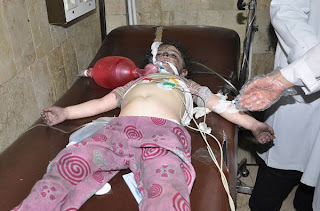 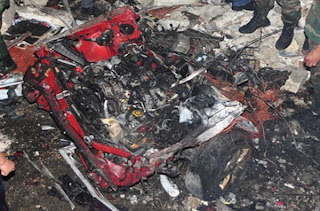 DAMASCUS, (SANA)-Terrorists blew up a booby-trapped car and two explosives at al-Worod neighborhood in Damascus, claiming the lives of 11 martyrs and injuring tens of the innocents in the area, some of them in critical condition.

A source in al-Muasaa Hospital told SANA that the hospital received 6 bodies of the martyrs and 29 others injured due to the terrorist explosions, most of them children and women. The source added that some of the injured were in critical condition and they were given the first aid.

A source in Yousef al-Azma Hospital stated it received 5 martyrs in addition to 28 persons injured, their conditions range between middle and critical. SANA reporter at the site of the explosions declared that the terrorist act led to grave damages in the houses of citizens, destruction of a number of cars, shops' facades in addition to huge damages in the infrastructure, service, telephone and electric networks. 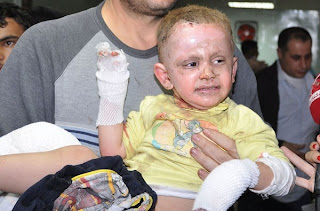 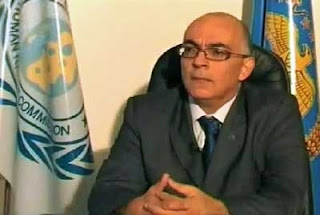 "We have asked them to stop this immediately, and we add our voice to the voice of Secretary-General of the United Nations Ban Ki-moon in demand not only from Qatar and Saudi Arabia, but also from Turkey which may be involved more than others, to stop supporting militants… we hold them fully responsible yesterday, today and in the future for every drop of blood spilled in Syria."

Abu Saeed described the position of Ki-moon on the need to stop supporting armed groups in Syria as being serious, explaining that this position is based on the facts that indicate the presence of terrorist organizations in the Syrian interior which work to undermine security and the Syrian society.

Abu Saeed pointed out that European sides gave documented that only five percent of the so-called armed opposition are Syrians and the rest are of multiple non-Syrian nationalities.

Abu Saeed said that the opposition exploits the massacres it commits prior to international conferences on Syria, stressing that the International High Commission for Human Rights relies in its reports on concrete evidence and objectivity, not emotions and political whims.

He explained that the opposition accuse the Syrian government of massacres, while the Commission carried out investigations, discovering that sides in the opposition benefited from these massacres and exploited them.

He went on to stress that change in Syria cannot come through violence, but rather through ballots, noting that the international community is aware of the strength and popularity of President Bashar al-Assad and is afraid of this, as they are aware that if a democratic choice were to be made as they claim then the Syrians will choose their leadership, and more specifically they will choose President al-Assad.

Regarding the mission of UN Envoy to Syria Lakhdar Ibrahimi, Abu Saeed affirmed that the Commission supports Ibrahimi and is prepared to offer anything that could ensure the success of his mission.

Putin: No-One Has the Right to Tell Russia How and to Whom it Exports Weapons if Exports Don't Contradict UN Sanctions 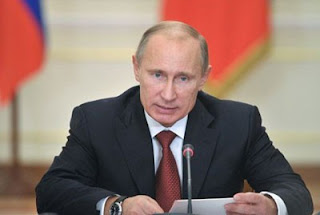 MOSCOW, (SANA) – Russian President Vladimir Putin said that no-one has the right to tell Russia how and to whom it may export weapons if the exports don't contradict UN sanctions.

In a speech on Wednesday, Putin said that Russia only signs agreements to export weapons and military equipment with legitimate authorities to boost the defensive capabilities of independent countries after careful study of the situation in the region in question, noting that not all exporters of weapons are so methodical.

Putin also said that unilateral or group sanctions outside the framework of the UN, particularly politicized sanctions, do not represent a rule for international law.

He also called for increasing the level of technical military cooperation among Brazil, Russia, India, China, South Africa and Vietnam.