Internal Trade Minister: The U.S. and EU Sanctions on Syria Target the Livelihood of the Syrian People 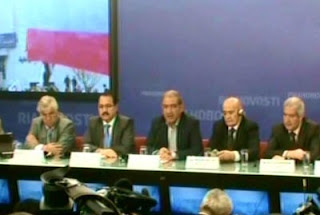 In a press conference in the Russian capital following meeting Russian officials, Jamil said that the Western-U.S. sanctions are unilateral and contradictory to international law, and that they prevent the Syrian people from receiving essential supplies, adding that the important thing now is to overcome the sanctions' effects, which is linked to resolving the crisis in Syria in a peaceful manner that ends bloodshed.

He said that the western countries' position regarding what is happening to Syria is hypocritical as they don't want an end to bloodshed; rather the opposite, as they are aware of the existence of extremist terrorists committing crimes against Syrians and they support them while at the same time talking about political solutions.

Jamil stressed that the crisis caused urgent economic issues, and while the U.S. and Europe claim that the sanctions are aimed at the government, these claims are hypocritical and incorrect as the sanctions affect every single Syrians, adding that the west and the U.S. aren't the ones who may decide the future of the Syrian people.

He said that current Syrian government which includes the peaceful Syrian opposition is the first step towards a full national unity government, and that national reconciliation is a central issue that can only be achieved by preventing foreign interference and abandoning violence, noting that hardliners among the opposition don't want dialogue.

Jamil said that the main issue is preserving Syria, and that the Syrian leadership has decided to head east in terms of politics and economy, underlining the old and historic relations between Syria and Russia.

He affirmed that dialogue is the basis for resolving the Syrian crisis, and that making preconditions such as the abdication of the leadership prior to dialogue is unacceptable and that such requests aims to prevent a political solution which requires dialogue among all sides.

Jamil described the talks in Moscow as constructive as both sides agreed on boosting economic cooperation between Syria and Russia in various areas, adding that Russia wants to help and support the Syrian people to overcome the current crisis, and that the two sides reached agreements which will be realized within the next few days and weeks.

He also noted that the economic pressure and the unjust siege against Syria lowered the buying power of the Syrian Pound and prevented the import of basic goods, while petroleum imports also suffered as local production isn't sufficient, affirming that those who prevent Syria from importing goods want to worsen the crisis and don't want solutions, which is why talks were held with Russia and other friends to resolve this issue.

Jamil went on to say that Russia's position in support of a political solution practically broke the media blockade and prevented a repetition of what happened in Iraq and Libya.

Regarding the printing of Syrian currency in Russia, said that this is a triumph since there were those who through that if they ceased printing money for Syria, it would cause it an economic and financial crisis, adding that Syria's isn't alone in this battle.

In turn, Finance Minister Mohammad al-Jleilati pointed out that Syria had contracts with a European country to print currency, and due to the sanctions this country refrained from delivering this currency which is why Syria turned to Russia and printed currency and stored in to replace damaged notes, in addition to introducing extra currency according to changes in the GDP, affirming that the printing of currency has no effect on inflation.

Al-Jleilati said that there's a possibility for Russia to provide foreign currency loans to help Syria during this crisis, adding that Syria has sufficient reserves but the current conditions require extra reserves.

For his part, Assistant Foreign and Expatriates Minister, Abdul-Fattah Ammoura, stressed that Syria welcomed the plan of the UN envoy Kofi Annan and its six points, agreed on it and has put it into effect, noting that Annan and the UN observers was made aware of the crimes committed by terrorist groups against Syria.

He said that Anan's plan has been a Syrian demand in the first place to have the crisis resolved through dialogue and peaceful means, but it is the other parties who do not want this plan to succeed and do not seek a peaceful solution to the crisis.

He said that Annan saw support for his plan from the Syrian government, while the other side resorted to foiling it, affirming that the Russian position is principled, moral and in line with the UN charter and international law.

Ammoura stressed that the Syrian people are steadfast in the face of what they are faced with and seek the independence of Syria's sovereign decision, adding that the Western countries have turned away from what they committed to at the Geneva meeting regarding the necessity of finding a peaceful solution to the crisis in Syria.

Speaking of the repercussions of the unfair Western ban imposed on Syria, Minister of Petroleum and Mineral Resources, Said Hneidi, said that because of this ban, Syria's oil production has dropped down to less than 200, 000 barrels per day.

Hneidi said that the Syrian government's current directive is to boost relation with Russia in terms of petroleum, noting that these relations are ongoing and that several Russian companies are still operating in this field in Syria.

He explained that Syria is an exporter of crude oil and an importer of some products, so the European embargo affected the Syrian energy sector which is why the government is working diligently to provide all Syrians' fuel needs.

In turn, Transport Minister Mahmoud Said said that the European embargo on the transport section and plane spare parts directly targets Syrian citizens and their activities, and that his ministry is working with the Russian Airlines (Aeroflot) to relieve the effects of the embargo and maintain the activities of the Syrian Airlines.

He also noted that the embargo also restricts marine transport, in addition to prohibiting Syrian Airlines planes to land in European airports, which was a sudden step that ignored thousands of reservations made by passengers, adding that work is ongoing to restore voyages in cooperation with Aeroflot.

First Deputy Foreign Minister Andrey Denisov said that the visit of the Syrian economic delegation to Moscow at this time and the talks it held show the Syrians' confidence in establishing stability in their country and proves that the Syrian leadership intends to develop the country after the crisis, which Russia supports strongly.

During his meeting with Deputy Prime Minister Jamil, Denisov said that Russia always considered the future in its relations with Syria, reiterating Russia's rejection of any interference in Syria's affairs or the use of force against it.

He also noted that the west and some countries in the Middle East made no efforts to influence the Syrian opposition; rather they provoked them and encouraged them to assume more extremist stances, supporting them in political, financial and military ways.

For his part, Jamil said that the talks held by the delegation with Russian officials were positive and helpful, adding that this visit and the talks show that the Syrian government is thinking about the work program for the first day after the resolution of the crisis which is due to conviction on part of the Syrian leadership and people that they are able to overcome the crisis.

He said that President Bashar al-Assad proposed heading towards the East both politically and economically, with Russia being the beginning of the East for Syria.

In a statement to SANA's correspondent in Moscow, Denisov underlined the deep-rooted relations between Syria and Russia, affirming that Russia's position regarding Syria is firm and cannot change and based on ending violence and armed conflict, noting that the Syrian government is prepared to listen to these suggestion and implement them, while the opposition continuously rejects the cessation of violence and bloodshed.

He reiterated Russia's rejection of any foreign interference in Syria's affairs, specifically interference by force, adding that Russia regrets Kofi Annan's resignation because he did important work and presented a realistic six-point plan, noting that violence would have ended in Syria if all sides implemented this plan, but the opposition – encouraged by some external forces – absolutely rejected the cessation of violence and bloodshed.

Syria and Russia signed an agreement for establishing a unified center for geopolitical, scientific, technical and commercial cooperation in order to strengthen bilateral relations and improve business relations.

The agreement stipulates that the center will provide legal services and support joint projects both in Syria and Russia, providing all possible assistance to scientific and technical establishments in both countries.