Situation in Syria is Now Better than any Previous Day of Conspiracy says Al-Zoubi (Sept 21, 2012) 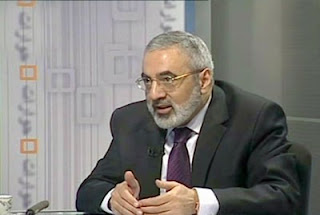 DAMASCUS, (SANA)- Information Minister Omran al-Zoubi stressed that the situation in the country is now better than any previous time in the course of conspiracy against Syria, and that in terms of security, the crisis is almost over.

In an interview with the Syrian TV on Friday, al-Zoubi said the scene in Syria has become clear as everybody now knows the identity and place of the enemy as well as its military and political support channels, external backers and internal tools.

"When we speak of victory, we mean the victory for Syria through foiling the external conspiracy and its internal tools," the Minister said.

He warned of Qatar's policy of supporting terrorists in Syria as posing a danger to the international security and peace, noting that most of Qatar's rulers are affiliated with the Muslim Brotherhood and Al Qaeda.

Al-Zoubi said that Qatar has been turned into an exchequer for al-Qaeda to carry out a subversive scheme against Syria as well as against the region and the world.

The Information Minister wondered "for whose sake are Qatar's rulers doing so?" considering that those rulers do not have the political ability, experience or understanding to have their own political project.

Al-Zoubi added that "When Qatar prepares sleeper cells in UAE and speaks of turning Abu Dhabi, Dubai and Sharjah into independent Islamic emirates, that threatens not only these areas' regimes but also the stability of their people, their identity and the international peace and security in the region which is considered the core of the economic world.

"They are only the funder or the cashier of the conspiracy, while the order of disbursement comes from another place. They are mere tools in the service of the Zionist project in the region," al-Zoubi added.

As for the statements of the Egyptian President Mohammed Mursi, al-Zoubi said that Egypt had always been and still is Syria's partner in all historic stages, adding that if Egypt restored its pan-Arab role, it will find that the extension of that role is in Damascus, and not in other Arab capitals.

Answering a question on Syria's stance towards the quartet initiative, the Minister reiterated that Syria welcomes any effort that serves the interest of the Syrian people and stops the conspiracy, wondering about the intentions of the countries participating in the initiative.

Regarding Iran's stances, al-Zoubi said "The Iranian stance has been clear since the start of the crisis… Tehran stands by the Syrian people and state. This stance is identical with the stances of Russia and China and all friendly countries."

He stressed that Saudi Arabia and Turkey constitute a part of the aggression on Syria, "therefore if their intentions are good, they must halt providing the gunmen and terrorists with funds and weapons and stop media incitement against Syria as a demonstration of good will."

Al-Zoubi called upon the countries and foreign parties participating in the aggression on Syria to halt this conduct and seize the political opportunity to back down on it.

"If they think they can achieve victory in Syria, they are deeply mistaken because in Syria only the Syrian people will win," he reaffirmed.

The Minister stressed that the Syrian people will defeat the conspiracy and thwart its project on the ground thanks to the wisdom of the Syrian leadership and the heroism of the Syrian armed forces.

He explained that what has been circulated in media is parts of a chat that took place between President al-Assad and a 9-member Egyptian media delegation in the framework of a personal visit.

Al-Zoubi stressed that the conversation was not recorded at all as it was not meant to be an interview, but what seems to have happened is that one of the visitors took out of context and gathered parts of the conversation which "was not prepared in the first place and should not be analyzed or built on or considered as political stances whether what came in it was true or untrue."

The Information Minister stressed that "when President al-Assad decides to say something or declare a political stance he's got the media tools and will say it with courage as we know him."

On the statements that there is an international struggle on Syria, al-Zoubi stressed that the basic issue is the steadfastness of Syria in the face of the conspiracy, adding that all countries were surprised by the ability of the Syrian people and leadership to overcome the plot.

The Minister said that the statement of the UN Secretary-General Ban Ki-moon in which he compared Al Qaeda to a regular army is odd, adding that "Ki-moon should not have made such a stance, as the Syrian Arab Army is an army of a sovereign state and was established by the constitution of this state, while Al Qaeda is an extremist terrorist organization funded by intelligence agencies."

On Saudi Arabia preventing Syrians from participating in Hajj pilgrimage, al-Zoubi noted that this is the first time such an action was taken by anyone other than Israel, stressing that the actions of Al Saud's regime constitutes a violation of the religious duties it must uphold.

Answering a question about the Syrian economy, the Minister replied that the Syrian economy had been targeted since the first day of the crisis, adding that Syria is capable of confronting the crisis regardless of its duration without suffering fragmentation or economic downfall.

Regarding the issue of refugees and the violations they suffer at the hands of some countries and their exploitation in some international circles, al-Zoubi said that this issue has been exploited politically in an amoral and illegal manner by these countries, noting that Syria hosted millions of Arabs out of commitment to moral duties.

He called upon Syrians abroad to return to their homeland, saying "it's true that the circumstances were difficult and they had to leave, but no-one closed the door behind them.