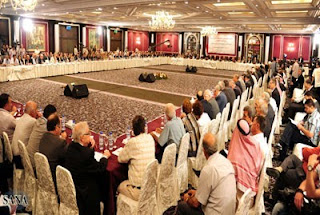 DAMASCUS, (SANA) – Activities of the political forum organized by the coalition parties of the National Progressive Front (NPF) and national and progressive powers under the title of "Political Dialogue and National Reconciliation: Path to Restore Stability and Security" kicked off on Monday at the Damascus-based Dama Rose Hotel.

In a speech during the opening of the Forum, Secretary General of the Arab Socialist Union Party, Safwan Qudsi, said that Syria is facing a massive conspiracy, some parts of it international, others are regional and some are Arab, all of which seeking to cancel Syria and erase it from history, but Syria showed its ability to stand fast and confront the conspiracy which it will foil.

In turn, Secretary General of the Socialist Unionists Party, Fayez Ismael, voiced his party's rejection of any foreign interference in Syria, asserting that Syria will be victorious and lauding the role of the Syrian Arab Army in defending the country with the people's support.

He said that most of those who are involved in the events don't know why they're fighting, and that part of them are outsiders fighting in a strange land who are armed by the US others.

Similarly, Secretary General of the Central Committee of the Syrian Communist Party, Ammar Bekdash, said that the forum shows the insistence of national parties and forces to defend Syria in the face of the attack waged by imperialist and Zionist forces and regressive regional regimes, with Syria's enemies employing every possible method including embargos, media warfare, vandalism, mass murder and assassination.

He also stressed the need for the main goal of economic and social policies to be improving the living standards of citizens, saying that his party presented a memo earlier this year presenting ideas for boosting the economic and social aspects of national steadfastness.

For his part, Secretary General of al-Ahed (Pledge) National Party, Ghassan Abdelaziz Othman, said that the crimes, destruction and targeting of national economy that are witnessed in Syria have nothing to do with any legitimate demands, affirming that external forces exploited the reality created by some policies that affected the majority of the people, usurping the public's legitimate demands.

He said that the conspiracy against Syria reflects the instability of the region, which the west views through colonial eyes that only want to preserve their interests.

In turn, Secretary General of the Syrian National Social Party, Issam Mahayri, denounced all the suspicious calls for summoning an external solution and distorting the reality of the crisis deliberately, affirming that dialogue is a healthy state and the path to foiling the conspiracy and improving political discourse in Syria.

He also stressed that it's the duty of the state and its establishments and forces to cooperate with the army and armed forces to confront terrorism, denouncing all those who support, participate in, and defend terrorism.

Mahayri also asserted that what is happening in Syria aims at undermining the resistance, saluting all the allies and friendly forces who stood alongside Syria in the face of the conspiracy targeting it.

In a similar speech, Secretary General of the Arab Socialists Movement, Ahmad al-Ahmad, pointed out that despite the scale of the conspiracy against Syria, the west and its Arab servants failed to achieve their goals, noting that this came about due to the unity of the Syrian people and the heroism of the Syrian Arab Army.

For his part, Secretary General of the Democratic Socialist Unionist Party, Fadlallah Nassereddin, said that what is happening in the Arab world poses a threat to pan-Arab and national security, with the Arab-Israeli conflict being the most intense crisis and the one that threatens world security and peace due to the attempts by the US-led western forces to control the region in coordination of Israel.

In turn, Secretary General of the Syrian Unified Communist Party, Hanin Nemr, said that nationalist Arab forces realize that the Arab-Israeli conflict sums up all the conflicts in the region, and that Syria has been involved in it since the 1950s, foiling one conspiracy after the other and paying the price in thousands of martyrs, along with the pressure, siege, threats and direct attacks it suffered as a result of its positions.

Nemr affirmed that the road to correcting mistakes and negative aspects is through peaceful methods approved by the new constitution and political parties law, and that those who chose the path of violence must realize that their path is blocked and leads nowhere, while dialogue is wide open for national opposition that isn't bound to foreign forces.

He also stressed that the time has come for internal dialogue, but it cannot be useful as long as weapons and mercenaries are flowing into Syria, adding that foreign interference hinders any political solution to the crisis.

Similarly, Secretary General of the Arab Democratic Union Party, Ghassan Ahmad Othman, said that Syria is being targeted, as it always has been, due to its progressive pan-Arabic stances and its role in the resistance in the Arab region, stressing the need to support the Syrian people's legitimate demands by transitioning into a pluralist, civil and democratic Syria.

The two-day forum tackles the topics of political dialogue, the army as the shield of homeland, combating terrorism, rejection of foreign intervention, national reconciliation and protecting the state and institutions.

The political forum which is being held by the National Progressive Front (NPF) parties and National and progressive forces continued on Monday its activities under the theme of "Political Dialogue and National Reconciliation are the Means to Restore Security and Stability".

Secretary-General of the Arab Socialist Union Party, Safwan Qudsi, pointed out in a speech that holding this forum by the NPF parties and the national and progressive forces would pave the ground for a national, popular and party situation that raises awareness about what was standing in the Syrian daily life and about the necessity of maintaining it.

He stressed that Syria is facing a huge conspiracy, adding that the conspiracy will fail and Syria will stay strong, active and influential.

For his part, Secretary-General of the Socialist Unionists Party, Fayez Ismael, stressed his party's rejection and condemnation of any foreign interference in Syria, adding that today's war is unparalleled because of the number of terrorists from various nationalities involved in it.

Secretary-General of the Central Committee of the Syrian Communist Party, Ammar Bikdash, said that this forum highlights the persistence of the national forces and parties to defending Syria in face of the fierce attack launched by the imperialism and Zionism in addition to other regional reactionary regimes.

Secretary-General of the National Covenant Party, Ghassan Abdul-Aziz Othman, stressed that the criminal acts and destruction and sabotage in addition to targeting the national economy can never be related to any legitimate demands, adding that the political movement was clear from the beginning to be the first step to a war against Syria.

For his part, Secretary-General of the Syrian Social Nationalist Party, Isam al-Mahayri, condemned all suspicious calls for a foreign solution and the deliberate distortion of defining the crisis in Syria.

He stressed that the political dialogue is a sustainable healthy situation and it is the way to curb and foil the conspiracy and conspirators.

Secretary-General of the Arab Socialist Movement, Ahmad al-Ahmad, said that in spite of the volume of conspiracy hatched against Syria and its repercussions, the colonial west has failed to achieve this conspiracy which has strategic dimensions and threatens security and stability in the region.

Chairman of the General Federation of Trade Unions, Mohammad Shaaban Azzoz, pointed out that Syria's army, people and leadership are targeted because of the national stances which reject a compromise on the Palestinian Cause and naturalization with the Israeli occupation.

He stressed the importance of dialogue with all sides except for those who called for foreign interference and arms, adding that the labor class has lost more than 500 workers who were martyred in line of duty.

For his part, member of the political bureau of the Socialist Unionist Party, Khaled al-Abboud, considered the Front Parties and the national and progressive forces alliance as having many tools to orchestrate a political struggle against another political team trying to attack the state and the society.

He pointed out to the importance of political dialogue as an exit from the crisis in Syria.