Rumors about air bombardments on Damascus are baseless: no use of helicopters

Information Source: News Broadcast by Some Satellite Channels on Aerial Bombardment of Some Places in Damascus Baseless 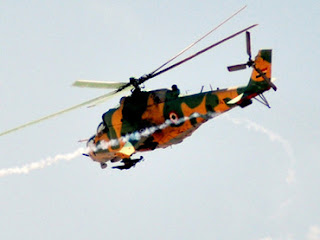 DAMASCUS, (SANA) – An information source on Sunday refuted as baseless the news broadcast by some satellite channels on aerial bombardment of some areas in Damascus.

The source stressed normal life in Damascus, adding that the authorities, in cooperation with locals, are chasing vanquished terrorists in certain streets.

---------------------
Although Reuters talks about helicopters, correspondents in Damascus from RT weren't able to confirm this. Would this indeed be another attempt to discredit the Syrian Forces?

Take a look at this movie below: these are the kind of people that are supported by the western civilized countries (video taken from Syrian Documents, July 21, 2012) - the ultimate symbol of true democracy and sensible negotiation. It reminds me more of the dark ages.