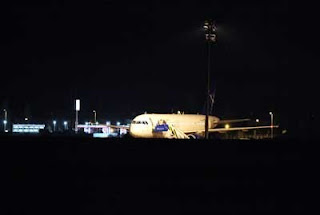 DAMASCUS, (SANA)- The Syrian Airbus 320 passenger plane coming from Moscow, which was forced by the Turkish authorities to land in Ankara Airport on Wednesday, arrived in Damascus at 05:10 am Thursday dawn.

Director of the Syrian Arab Airlines, Ghaida Abdullatif, stressed in a statement to SANA that the Turkish authorities assaulted the crew before allowing the plane to take off from Ankara Airport because the crew members refused to sign a document saying that the plane made an emergency landing.

"Turkish F-16 warplanes forced the Syrian plane to land to be searched, doing so in violation of the international procedures in terms of not formerly notifying neither its pilot nor the Turkish civil airline, which almost caused an air accident due to warplanes coming close at an uncalculated distance," said Abdullatif.

She stressed that the Syrian plane was not carrying any illegal materials and that the cargo was in compliance with the international laws and systems having a legal bill of landing.

Abdullatif assured that all the passengers are in a good health condition, however suffering a very bad psychological state.

The Director of the Syrian Arab Airlines considered what happened as "an inhumane act" that indicates a flaw in dealing with the rules and laws stated in the Chicago Convention on International Civil Aviation.

"Added to that," Abdullatif said, "the long hours during which the passengers were locked without being provided any services or even informed of what was going on, which left them in a state of panic and a very bad psychological condition."

She noted that the Syrian Arab Airlines will file a protest to the International Union of Aviation and the Arab Aviation Union as well as all the international and humanitarian organizations against the inhumane treatment the plane's crew and passengers were subjected to.

The Russian Foreign Ministry expressed its concern over the risks which the passengers of the Syrian plane, including 17 Russians, were subjected to being locked for 8 hours on board.

A statement by the Ministry on Thursday stressed that the Turkish side did not inform the Russian Embassy in Ankara of the presence of Russian citizens on board the plane, adding that "we only knew about that through electronic media."

The statement said Russian consulate staff and a doctor were denied permission to see the Russian passengers without giving explanations despite the Russian Embassy's asking for permission from the Turkish authorities.

The statement stressed that the Russian side insists on getting an explanation of such acts by the Turkish authorities towards the Russian citizens and on taking measures that prevent the repetition of such incidents in the future.

A source at the Ministry also said the Russian Embassy in Ankara immediately called the Turkish Foreign Ministry and asked for an explanation about what the Syrian plane was subjected to in the course of its flight from Moscow to Damascus, calling upon the Turkish authorities to assume their responsibilities for the safety of the Russian passengers who were on board.

In the same context, a high-ranking source at a Russian weapons export institution dismissed the existence of any type of weapons or military technology devices and systems on board the Syrian plane.

A diplomatic source in Moscow announced on Thursday that the Russian ambassador in Ankara visited the Turkish Foreign Ministry.

The source indicated that the visit was related to the incident of forcing the Syrian civilian aircraft to land in Ankara airport, which in fact was on a regular flight from Moscow to Damascus with 17 Russian passengers on board, among them 7 children.

The Russian authorities expressed concern over the incident, considering that it threatened its nationals and was a violation of international conventions in treating civilian passengers.

There have been no further information on the visit of the Russian ambassador.

Foreign and Expatriates Ministry stressed in a statement earlier in the day that the Syrian civilian aircraft was carrying no weapons or prohibited goods, considering the hostile Turkish behavior an additional evidence on the aggressive policy adopted by Erdogan's government, taking into account the training, harboring and facilitating infiltration through its borders and bombing the Syrian territories.