Israel sets fire to various areas of Golan-heights, Syria and uses it to dump nuclear, chemical and industrial waste 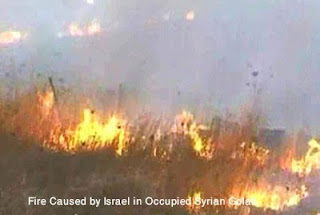 DAMASCUS, (SANA)_The Ministry of State for Environment Affairs called upon the world public opinion and upon concerned environment organizations to confront the aggressive practices of the Israeli occupation authorities in the occupied Syrian Golan, which aim to deplete its resources.

In a statement on Monday, the Ministry said that the Israeli occupation is deliberately causing fire in Ein El-Tineh, al-Shita, al-Hamidieh, Bir Ajam, Breika, Kodneh and al-Rafeed, adding that the fire burned thousands of acres of oak trees and plenty of rare plant species.

The statement indicated that the Israeli occupation has uprooted thousands of apple and cherry trees in Golan for Israeli military purposes, displaced Syrian citizens, buried nuclear, chemical and industrial materials in the land and deprived the Syrian citizens of their right in investing their lands and properties.

The ministry underlined the importance of putting pressure on the Israeli occupation authorities to abide by the Golan-relevant resolutions and refrain from exploiting its natural resources or any measures that could harm the environment.

read more about how Israel intends to demolish 8 Palestinian villages in the Occupied West Bank because they need the area for their army - http://iraansnieuws.blogspot.nl/2012/07/israel-sloopt-8-palestijnse-dorpen.html
Gepost door Joost op 01:50