Life back to Normal in al-Midan, Damascus in five days, according to Governor 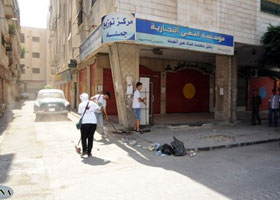 Governor of Damascus, D. Bashr al-Sabban, stressed that normal life will be back to al-Midan neighborhood in five days maximum by the time maintenance works will have been completed.

In a statement to journalists following a tour in the mentioned neighborhood, Dr. al-Sabban said that the governorate has employed all its capabilities and workshops, along with those of the helping national institutions, to finish their work in the specified time to ensure the return of the residents to al-Midan to practice daily activities as normal.

The governor announced that the work has begun to provide supply baskets of the main food materials to the inhabitants who have already started coming back to al-Midan neighborhood.


He noted that the governorate's priority right now is to restore electricity to the neighborhood and secure food materials to ensure a strong return of residents which has so far reached 15 percent.

The governor applauded the sacrifices of the army and law enforcement forces, applauding the qualitative operations which they carried out while clearing al-Midan neighborhood of the armed terrorist groups and which helped eliminate material damage.

He expressed thanks to the residents who had left the neighborhood to help get the situation tackled quickly, calling on them to return to their homes safe and sound.

The governor reviewed during his tour the material damage caused to the public and private properties in the neighborhood and met a number of the residents who returned back and started cleaning and rearranging their properties.

original at:  http://www.syriaonline.sy/?f=Details&catid=12&pageid=3038. Sana.sy is still off-line at the time of this writing.