At a time when Syria's newssite Sana.sy is again unreachable, as is Thierry Meyssan's Voltairenet.org,  we must do everything within our might to present information that is not biased by western-gulf-arab media. Fortunately there is still the Iranian Press TV and Russia's RT that can still be reached. Here's a copy of an article from July 21, 2012 warning the Syrian people of a fake TV-channel. The original of this story can be found at: http://www.presstv.ir/detail/2012/07/21/251984/syrians-warned-against-fake-tv-channel/

also watch Thierry Meyssan's video from the evenening of July 19, 2012 (unfortunately only available in French). More about these impending fake TV broadcasts at: http://iraansnieuws.blogspot.nl/2012/06/navo-bereidt-grootscheepse.html. 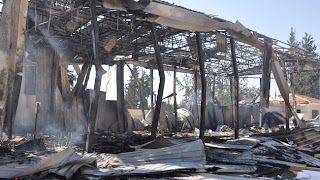 The Syrian Information Ministry has cautioned the nation against a “fake” satellite channel which carries the logo of the country’s national TV but has actually been set up to broadcast anti-government reports.

At the moment a fake channel is broadcasting Syrian national songs as well as its national anthem to lay the ground for broadcasting the programs that their nature is clear, the ministry said in a statement.

It issued the warning after armed terrorists kidnapped Mohammed Saeed, a broadcaster of the Syrian television, in Jdeidet Artouz area of the capital Damascus.

The ministry also warned that it is possible that the Syrian national TV is taken off air any moment and replaced by the fake channel.

Syrian officials had previously warned about an intensifying media campaign and spread of rumors against the Damascus government.

Syrian Satellite channel Dunya TV, which has played a key role in disclosing different plots against Syria, has been taken off air from Arab satellites of Arabsat and Nilesat.

Syria has been experiencing unrest since March 2011, with demonstrations being held both against and in support of President Bashar al-Assad's government.

The Syrian government says outlaws, saboteurs, and armed terrorists are the driving factor behind the unrest and deadly violence while the opposition accuses the security forces of being behind the killings.

Damascus also says that the chaos is being orchestrated from outside the country and the security forces have been given clear instructions not to harm civilians.

From: http://www.syriaonline.sy/?f=Details&catid=12&pageid=3029, another Syrian News Site that has not been downed:

Information Ministry: A Fake Channel is Using Syrian Satellite Channel Logo and May
Replace Genuine Channel
DAMASCUS, (SANA) – The Information Ministry announced that there is a satellite channel using the logo of the Syrian Satellite Channel and broadcasting nationalistic songs in preparation for springing a media ambush which has been uncovered before. This channel may appear on the same frequency as the genuine channel if it is cut off at any time.

The Ministry affirmed that the continuation of the genuine Syrian channels is linked to the presence of its well-known programs and presenters, and that the aforementioned channel and any similar channel is not related to the Syrian national media and constitutes blatant media piracy.
Gepost door Joost op 01:34