Makdessi: what happened in al-Treimseh was a military operation between the army and gunmen who terrorized civilians 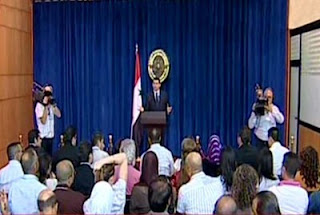 DAMASCUS_ Spokesman for the Foreign and Expatriates Ministry Dr. Jihad Makdessi on Sunday described as 'hasty' the letter of the UN Envoy Kofi Annan over the reality of the events in al-Treimseh Town in Hama countryside.

In a press conference held in Damascus, Makdessi said that armed terrorist groups overran the town and terrorized its people, adding that the terrorists launched attacks against the law-enforcement personnel from this town.

He stressed that the Syrian army has not used any heavy weapons in the area and used only personnel carriers and light weapons, adding that clashes between the law-enforcement personnel and the terrorists lasted only for few hours.

Makdessi added that only five buildings were damaged as the terrorists were positioned in these buildings, highlighting that what happened in al-Treimseh was not a massacre but a military operation took place between the army and armed terrorist groups that don't believe in dialogue or political solution.

He said those who were killed in al-Treimseh are from the terrorists whose number reached 37 and two civilians. " Whoever takes up arms against the state will be in a confrontation with the Syrian Arab Army and we welcome those who want the dialogue," Makdessi added.
The Foriegn Ministry Spokesman said: " We had documented more than 10000 violations of Annan's plan by the armed groups...
Gepost door Joost op 05:54